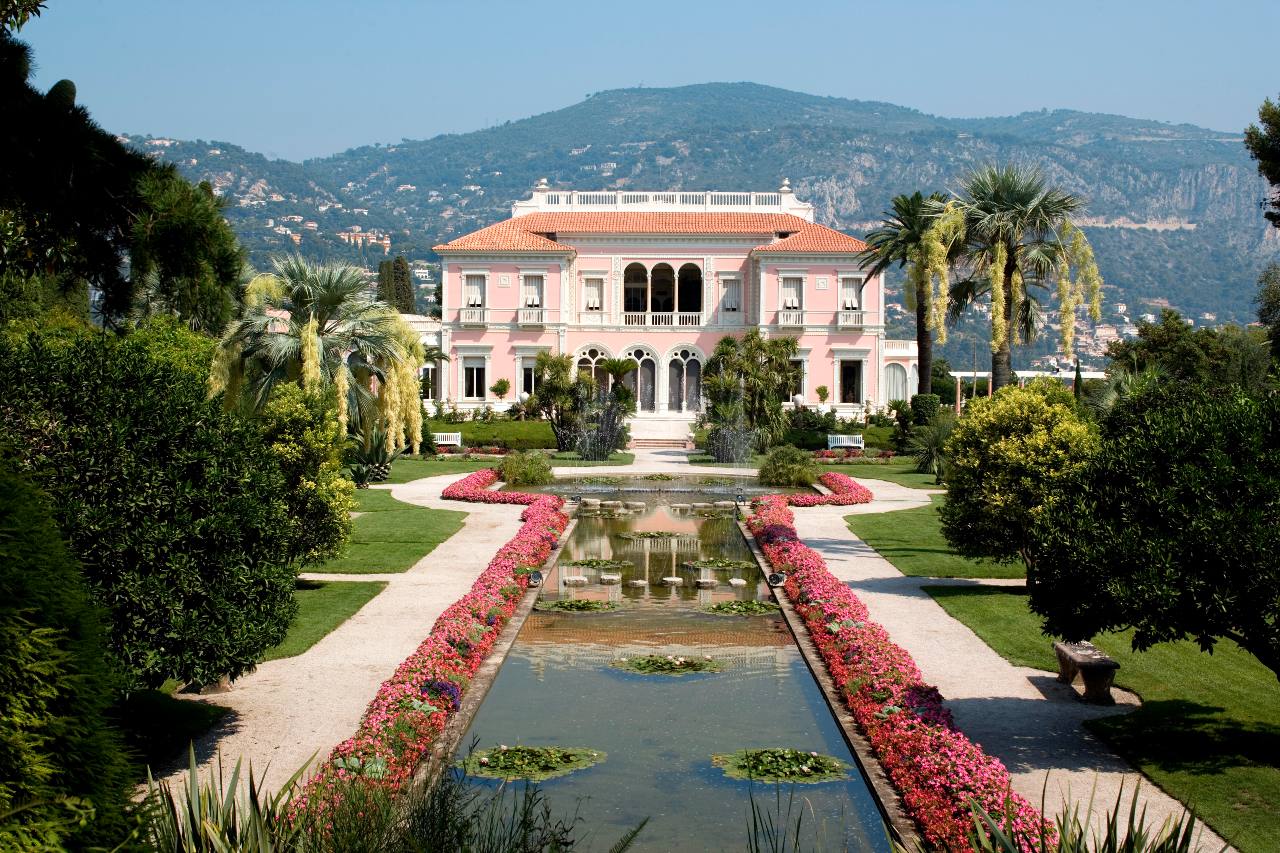 Villa Ephrussi de Rothschild, also called Villa Île-de-France is one of the most beautiful renaissance palaces of the Côte d’Azur and the emblem of Saint-Jean-Cap-Ferrat. Built on a summit of the peninsula it is visible from both sides of the Cap.

History of the palace

Béatrice de Rothschild, the daughter of Baron Alphonse de Rothschild, governor of the Banque de France, inherits her father’s immense fortune at the age of 41. During her visit to Beaulieu the same year she discovers the beautiful landscape of Saint-Jean and purchases seven hectares of rocky land that the Belgian King Leopold II has not yet snapped up.

Works begin immediately by dynamiting the ground and releveling the surface with hundreds of cartloads of arable soil. Tha baroness aspires nothing but perfection, she consults a dozen of architects and eventually entrusts Jaques-Marcel Auburtin with the design of the villa and Aaron Messiah with its construction. Béatrice commissions one of the most famous landscape gardeners of her time for the plants: Harold Peto, an architect who not only designs houses but also gardens. The building of the palace takes 5 years and in 1912 the baroness moves into the villa for a period of 10 years, making it her winter residence.

Suffering from tuberculosis she passes away in 1934, with her death the Academy of Fine Arts of the French Institute inherits the villa, the 7 hectares of land, and some 5000 works of art by will and testament. Unfortunately, the palace is completely abandoned by Béatrice in the last 10 years of her life and requires extensive refurbishing. Following the Second World War the once yellow facade gets painted in reddish-pink hues and the villa with its gardens gets restored to its previous splendour.

The villa today
Today the villa is open to the public enabling visitors to admire the sumptuous residence of a great art lover of the Belle Epoque with its rare collection of porcelaine, antique furniture, old master paintings, and sculptures. The villa is surrounded by 9 splendid gardens of different themes which are classified as the Notable Gardens of France by the French Ministry of Culture. The 9 themes are as follows: French, Spanish, Japanese, Florentine, Provençal, Exotic, Stone, Rose, and Sèvres.

Events held at the premises
Every year the villa serves as a location for numerous festivals and venues and is considered one of the most aspired and romantic wedding destinations. We will be happy to help you rent the villa for a wide range of occasions. Contact our experienced agents for more information.